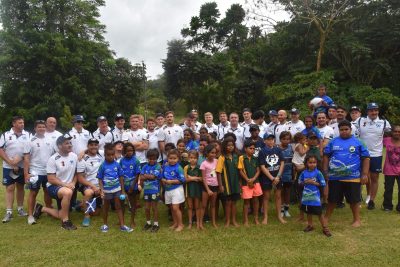 Rugby league was founded in Scotland by Mal Reid. Mal was born and grew up in Barrow and had long been a lecturer at Aberdeen University. In 1987 he was approached by David Oxley and Martyn Sadler to organise a Scotland Students team. Mal’s great work led to a Scotland Students team taking part in the 1989 Student World Cup in England and the 1992 tournament in Sydney, where they beat England in the Plate Final to finish 5th. The Scotland captain in 1992 was Bob Baxendale who went on to be a Lieutenant Colonel in the Royal Marines and is now a member of the Scotland Rugby League Board.

The success of the students led to passionate rugby league people, Mal Dunning, Graham Watson and Mick Trei organising various rugby league events that culminated in a very successful 10 a side competition at Whitecraigs near Glasgow and then an inaugural Scotland XIII match versus the North East at Meadowbank in Edinburgh in 1994.

All this activity led to a group of 17 people meeting on 6th September 1994 for the first meeting of what was named as the Scottish Rugby League Development Association. The meeting took place at The Pitz in Portobello, just to the east of Edinburgh. Amongst the group were a number of well known rugby league personalities including John Risman who was appointed Chairman, Hector McNeil who was appointed Treasurer, and Vic Semple and Paul Scanlon Wells. 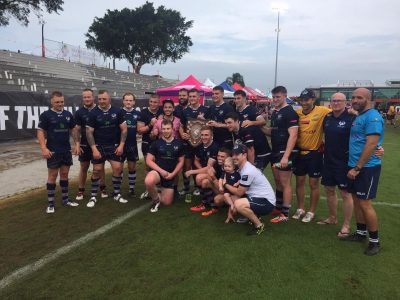 In 1996 Forth and Clyde Nomads won the first ever Scottish Challenge Cup beating Stirling University in the final. The first Grand Final was won by Border Eagles in 1998. The most recent winners of a major cup are Edinburgh Eagle who won the 2019 North East Grand Final 38-34 on Saturday 17th August.

As is well documented in Gavin Willacy’s excellent book “ Rugby League Bravehearts: The History of Scottish Rugby League” which was published in June 2002 and provides much of the information used in this article, the history of a sport like rugby league in a nation like Scotland is one of many ups and downs but more than anything it is about the commitment of a long list of dedicated volunteers and players.

There are so many people who have dedicated so much time to our great sport over the last 25 years. They are too many to mention individually but they know who they are. Without these tremendous volunteers there would be no rugby league in Scotland. On behalf of all those who have played rugby league in and for Scotand and all those who have supported our clubs and our national teams, I would like to say thanks to all those people who have committed so much time and effort to the game in Scotland

As someone who played for Scotland Students before the game was formally established in the country, I am well placed to confirm what a great experience it is to play rugby league for your country and to then be able to help support the sport as a Board member is very special

The 25th anniversary will be celebrated on the match shirts that will be worn for the 2021 World Cup Qualifiers on 26th October against Serbia and on 1st November against Greece. Supporters can also purchase a 25th anniversary polo shirt from BSK pro here