The draws for the Rugby League World Cup 2021 (RLWC2021) took place at Buckingham Palace today (Thursday 16 January), where each competing nation in the respective men’s, women’s and wheelchair events learnt their group opponents.

England men’s team will kick the tournament off against Samoa in a blockbuster opening fixture at St James Park, Newcastle on October 23, 2021. They will be joined by France and Greece in Group A. The full list of groups is as follows:

We’re in an exciting group with the World Champions Australia, Fiji is a game we will focus on and if we can turn them over we have a chance to make the Quarter Finals. Italy will have a good squad and have shown inthe past they can be dangerous. The squad whatsapp group hasn’t stopped pinging since the draw came out and are excited by the prospect of playing the World Champions.  The Wheelchair team have got a good draw and i’m sure Captain Jay Anderson will raly the troops and they will do well in the World Cup.

Dale Ferguson, Scotland Captain had this to say about today’s draw:

This is a great draw for us to play and prove ourselves against some of the best players in the world. We have a world class set of young lads who will get their opportunity to reap the rewards. As for myself it’s always an honor to represent Scotland and my family. There is no better place to show what it means than on the world stage

The wheelchair draw followed the same format as the women’s, resulting with hosts England being drawn alongside Spain and Norway in Group A. Their opening fixture will be against Australia on November 11, 2021 at The Copper Box Arena, London. The full list of groups is as follows:

It’s a very tough group, with some top teams. The squad are excited and looking forward to taking on France who are the reigning champions and Wales who hold the Celtic Cup. We’re also very excited to see what the USA bring to the table. Its great to see new nations joining the Wheelchair game; it’s fantastic to see the Wheelchair game developing and growing year on year.

Jay Anderson, Scotland Captain had this to say about the draw:

Delighted with the draw. Excited at the prospect of meeting and playing Wales, USA and the current World Cup holders France.
I know this will be a tough group with quality opposition. Scotland’s Bravehearts now know the challenges ahead and we, as a team need to be focused and put every effort into training and building our squad ahead of this wonderful tournament.

What an absolutely fantastic event for the whole rugby league family. Anyone who was involved in the RLWC 2021 draw this morning can only feel humbled and incredibly privileged to have been there.

The chance for our wheelchair team to play against France, Wales and the USA is incredible. I know that everyone involved will be very excited at the opportunity. For our men’s squad, games against the likes of Australia and Fiji don’t come along very often and I know from the response from the players group after the draw that the guys are extremely excited about these 2 games and also the chance to play against what will be a very good Italian team.

The draws have been a fantastic example of where this tournament is aiming to be in 2021. We want to deliver a truly world class event next year and we’re really excited by the first three fixtures that have come out from today’s draws.

We look forward to announcing the full schedule of games along with ticket prices in the next few months. We are hugely excited to welcome the competing nations to what will be the pinnacle of rugby league competition as we look to deliver the biggest and best Rugby League World Cup of all time.”

The RLWC2021 draws were overseen by an external observer from Deloitte to ensure all procedures were followed correctly. 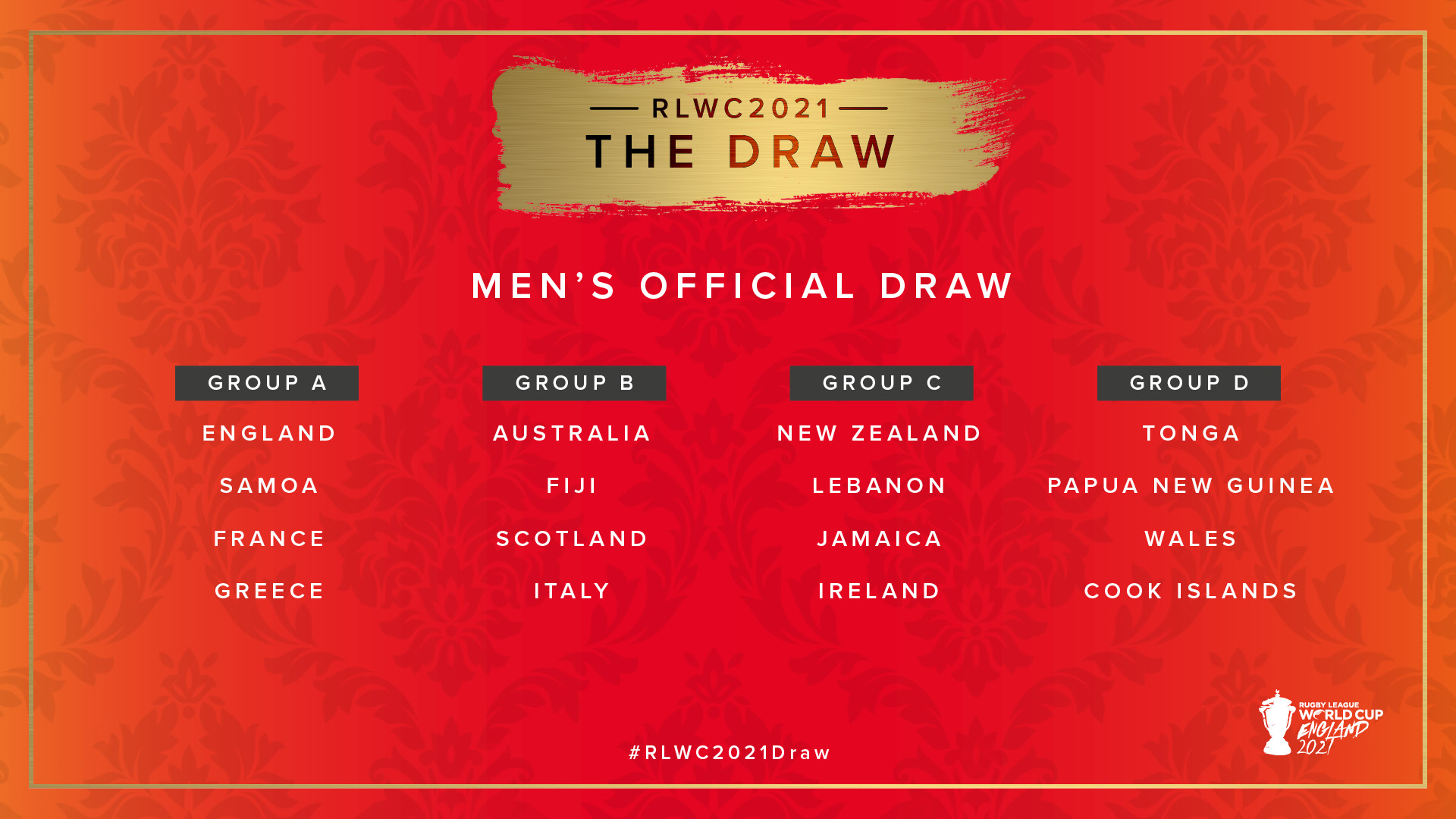 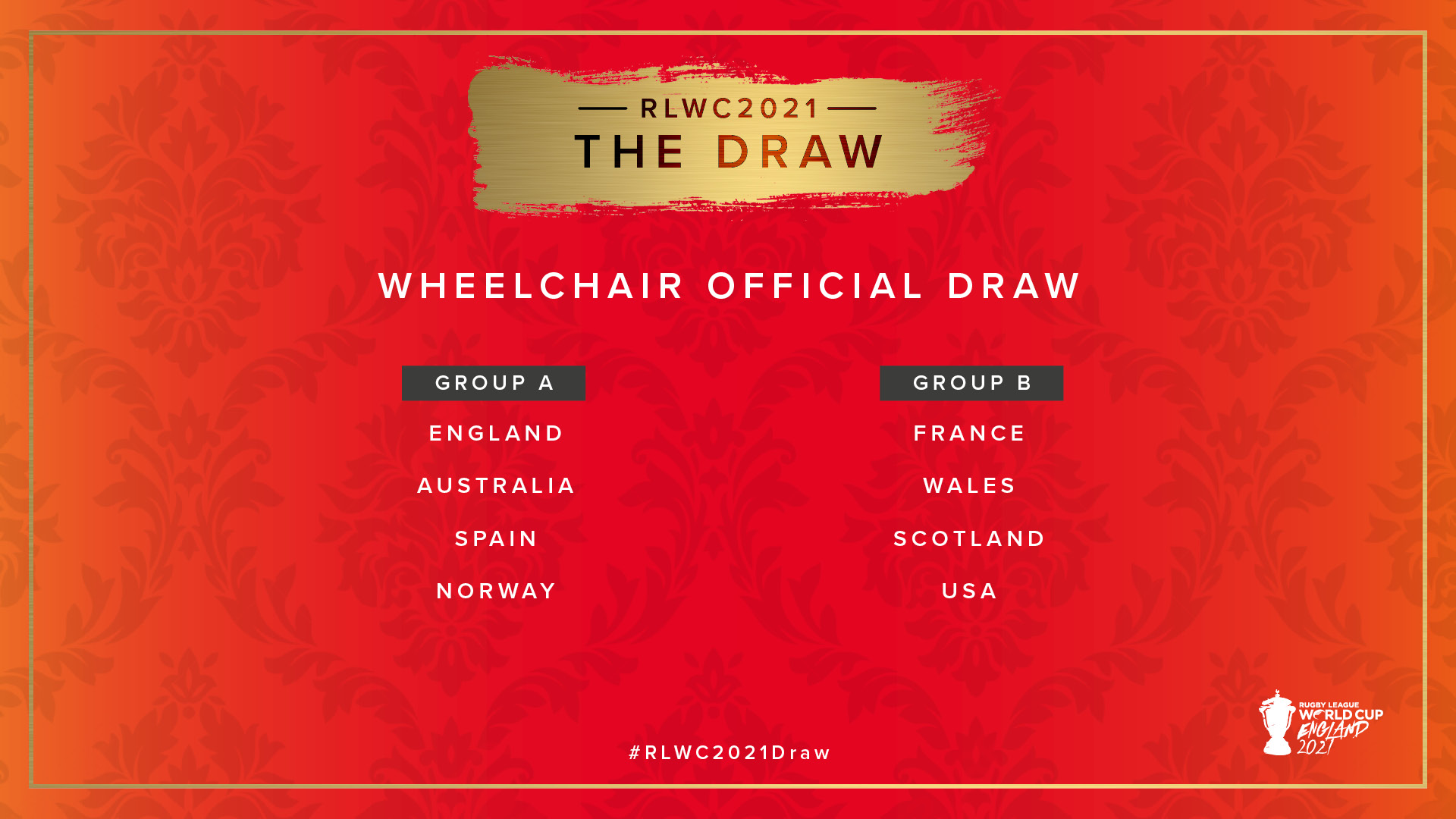